Lean Six Sigma Green Belt - Provide your team with the skills needed to drive better productivity within your organisation.

After just 4 weeks you will be ready and supported to lead change in the workplace. You’ll be ready for your new career in operational excellence.

A Lean Six Sigma Green Belt can eliminate waste and improve the performance of any business process. The 80 / 20 rule was developed by Vilfredo Pareto in the 19th century and it is more relevant than ever in the 21st.

After successfully completing this course you will learn how to

Businesses achieve competitive success in one of three ways...

Most businesses are not Apple, selling the latest “must have” product. Similarly, most businesses are unable to achieve the level of business integration and depth of relationship that SAP or IBM are able to. The majority of organisations operate in a directly competitive marketplace where similar companies offer a somewhat similar product or service. In today’s world of ever increasing disruption & competition businesses that are able to achieve operational excellence hold a competitive advantage.

MBA programs from the world’s leading institutes all include operational excellence as a foundation component for leadership development.

Recent job market studies show that at any one time, more than 10,000 jobs related to operational excellence (1) are listed in Australia alone. According to Money’s “Highest-Paying Skills for $100K+ Jobs” (2) Lean Six Sigma Green Belts and Black Belts earn an additional 8.7% and 10.5% higher salary than their peers, respectively.

Lean Six Sigma is a well-established and well-respected approach to achieving operational excellence and Lean Six Sigma skills continue to be in high demand. OE Partners in partnership with APMG International and the Lean Six Sigma Academy have
designed this course to give you practical skills to transform businesses and accelerate your career.

We look forward to partnering with you on your journey.

Today’s organisations face performance pressures, potential disruption and a continually
changing marketplace. It takes skill and knowledge to simplify the complexity and zero in on
what the strategic priorities for the business should be.

A Lean Six Sigma Green Belt can eliminate waste and improve the performance of any business
process. The 80 / 20 rule was developed by Vilfredo Pareto in the 19th century and it is more
relevant than ever in the 21st.

After successfully completing this course you will learn how to...

Having spent years in the field executing 100’s of business improvement projects and transformation programs ourselves, at OE Partners we understand that getting change to happen requires more than just technical knowhow and numbers. It requires working with people and through extended teams. This is why our program also includes the latest thinking on Change Management and Project Management Practices

Lean Six Sigma Green Belts and Black Belts identify the priority problems that companies face. They simplify the complexity into defined and manageable problem statements, then work with data and teams to bring about effective solutions.

A. Business Problem:
Orrcon Steel is a leading Australian manufacturer and distributor of steel, tube and pipe. The business, owned by BlueScope Steel, employs some 600 people in manufacturing plants in Queensland and South Australia and distribution plants throughout Australia. At the heart of the Victorian distribution plant is an automated steel bar picking machine, a large and complex piece of equipment with four individual operating stations, which has been in place for 13 years. Orrcon took over this machine in March 2016, and quickly found that bottlenecks and inefficiencies meant next-day deliveries were often not being met.

B. How Lean Six Sigma Helped:
Through workshops the team developed an end to end site Value Stream Map, and collected key operational performance data. With a newly achieved visibility and understanding on how the process operated as a whole, the team then conducted “go & see” activities and further problem-solving workshops. The causes of bottlenecks were identified, and methods of operation changed to ensure next-day delivery of steel.

C. The Outcome:
DIFOT (delivery in full on time) is now being achieved for just over 90% of orders, compared to 60% previously. Customer satisfaction has improved markedly, machine replenishment systems have been improved, maintenance has been streamlined and labour needs have dropped by about 20%.

A. Business Problem:
After a decade in business, WordPress website and blog developer Incsub had become one of the world’s largest WordPress sites. The Australian-based company has three business areas: WPMU DEV, with around 100 subscription products for members; Edublogs, which provides millions of blogs in the education field; and CampusPress, which hosts educational WordPress sites.

Like many successful startups, Incsub had grown organically and rapidly. But a lack of proper systems and processes led to client losses because of mistakes, duplications and staff confusion as to how to approach tasks.

B. How Lean Six Sigma Helped:
Incsub’s staff & stakeholders were interviewed and, two overall business objectives were set: build foundations to allow scale, and achieve measurable improvement of business performance in customer retention and growth. Two projects each had their own problem-solving team: reduction in bugs and member cancellations; and design, development and QA process improvement.

Lean six sigma data analytics were used to better understand how the process was currently performing and what issues were leading to customer cancellations. The team was trained in Lean problem solving and A3 reporting. A structured DMAIC (Define, Measure, Analyse, Improve, Control) problem solving approach allowed all team members to get on the same page and work together in a disciplined fashion towards achieving a measurable improvement.

C. The Outcome:
Reduction in software bugs and client cancellations was tackled first project. A 96% reduction in the number of reported but unsolved bugs was achieved, reducing from 878 at project commencement to 29 at completion. A 58% reduction in the number of member cancellations also resulted, down from 60 per week to 25 per week. The project has already delivered savings of hundreds of thousands of dollars, and will deliver millions of dollars of saving in the long term.

Lean Six Sigma in the Media

Lean Six Sigma has established itself as a well known and respected operational excellence strategy:

“Instead of spending years in the classroom to learn an entire subject, give students and workers access to ad hoc courses and certifications. This will shorten the educational time commitment, thereby lengthening the time an individual has to actually master the skill on the job. ... Lean Six Sigma certifications center on hands-on learning. While there is the obvious bookwork, the programs require specific on-the-job training... These programs provide the tangible skill sets that employers seek”

“We say that Six Sigma is a common language because this enables us to bridge boundaries. We have about 90 master black belts within our company and our training enables us to communicate effectively and collaboratively”

“Lean Six Sigma is ideal for projects targeted at reducing waste, cycle times or process variance, or at increasing product or service quality. Business outcome owners, business process directors and senior IT managers should include LSS in their toolbox of business process improvement methodologies”

“Millions of dollars can be saved through improvement initiatives related to increasing productivity, reducing costs, stimulating innovation, and transforming businesses. Lean... and Six Sigma are some of the more well-known and used methodologies used by leading businesses over the years to develop these improvements”

“Use a tested process improvement approach. Combining facts generated by analytical tools with techniques such as Lean Six Sigma can systematically uncover root causes and help create a road map for reducing complexity”

Transformation in All Industries

Lean Six Sigma has its origins in the manufacturing sector, however it has now been adopted in a wide range of industries:

Tech
The real value of technology is demonstrated and the deployment process improved when Lean Six Sigma is applied to major IT projects (https://www.cio.com/article/2439918/it-organization/six-sigma-for-better-it-operations-and-customer-satisfaction.html)

The goal of our program is to equip participants with the capabilities to apply Lean Six Sigma methodologies to a variety of business problems. Foundational theory and comprehension is the first step, then the program covers practical exercises to reinforce theory and a hands on simulated manufacturing process is used to get participants thinking about improvement in practice.

Our program is comprehensive and designed to ensure participants get the most out of their investment with a true capability build. By running our program over 4 weeks with 4 stages to ensure lasting capability is achieved.

Our courses & trainers are independently certified by APMG International.

APMG International is the world’s largest and most trusted certification body, running over 150,000 certification exams globally each year. 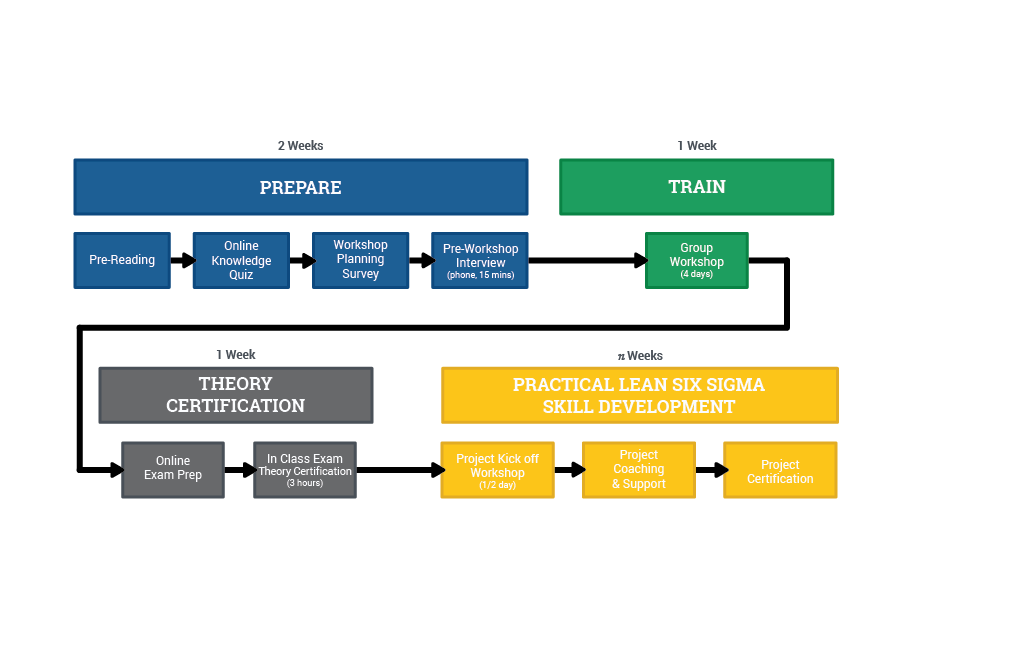 Workplace Based Project Coaching & Support
The real learning happens when you apply your Lean Six Sigma skills in the workplace. Should you choose to take the Project Certification Option, OE Partners is here to support each step of the way.

With our Project Kick-off workshops we get you over the initial hurdle of “How do I start?” Then we make sure you successfully implement your first project by providing you with the regular project coaching support of a Master Black Belt practitioner.