After a decade in business, WordPress website and blog developer Incsub had become one of the world’s largest WordPress sites. The Australian-based company has three business areas: WPMU DEV, with around 100 subscription products for members; Edublogs, which provides millions of blogs in the education field; and CampusPress, which hosts educational WordPress sites.

Like many successful startups, Incsub had grown organically and rapidly. But a lack of proper systems and processes led to client losses because of mistakes, duplications and staff confusion as to how to approach tasks.

It was agreed the immediate focus should be on the WPMU DEV business. Once Damien Lacey of OE Partners had surveyed Incsub’s staff and interviewed stakeholders, two overall business objectives were set: build foundations to allow scale, and achieve measurable improvement of business performance in customer retention and growth. Two projects each had their own problem-solving team: reduction in bugs and member cancellations; and design, development and QA process improvement.

Reduction in software bugs and client cancellations was tackled first project. A 96% reduction in the number of reported but unsolved bugs was achieved, reducing from 878 at project commencement to 29 at completion. A 58% reduction in the number of member cancellations also resulted, down from 60 per week to 25 per week. The project has already delivered savings of hundreds of thousands of dollars, with the potential to save millions of dollars in the long term.

When Incsub CEO James Farmer realised the company had reached the tipping point between a small team operation and a complex medium sized company which required a formal structure, he called in OE Partners.

“We were at the point where operations had become way too much to handle without proper processes and systems. Things were being duplicated, mistakes were being made, and there was confusion about how to approach tasks.”

“We realised we needed some structure, and OE Partners were great given their background in engineering and systems, particularly their experience with Toyota. While we knew things were going wrong we weren’t sure how to identify the actual problems, but OE Partners really helped us to do this,” James says.

“They have an impressive capacity to draw out plans, and also to identify where things are falling apart. They very personable, and very open to reaching out and going through issues with people.” Damien says that to achieve scale, it was clear the company needed to transition from an owner-driven business to a business driven by systems and processes. 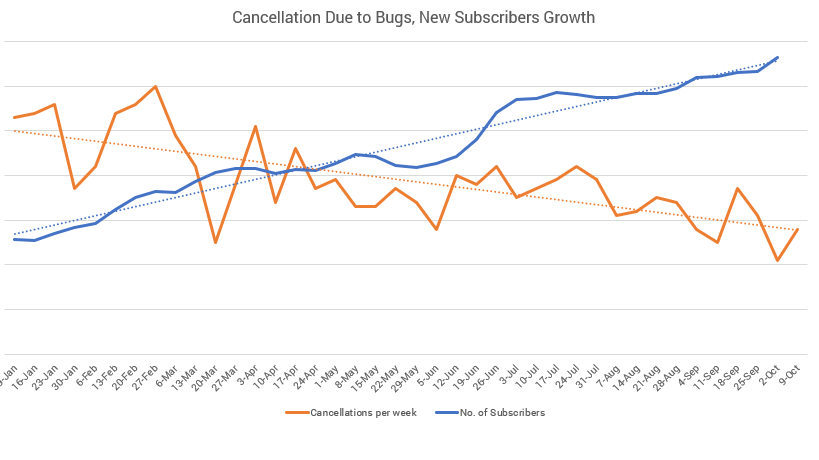 An organisational survey asked the company’s 70 staff about the tasks which most occupied their time, the appropriateness of their roles, their ideas to improve productivity and efficiency and excite clients, and the company’s culture and workplace.

After interviews were conducted with stakeholders, problem-solving teams were formed around the priority issues of bugs and client cancellation reductions, and design, development and QA process improvement.

“The outcomes, and the way we’ve been able to maintain them over time, have definitely exceeded my expectations of what we might achieve. The project has already delivered savings of hundreds of thousands of dollars, with the potential to save millions of dollars in the long term.”

Following training in problem solving and Lean thinking, new measurement systems were established to collect and display critical data including client and product cancellations, the number of bugs and an exit survey.

Product improvement workshops were held after problem solving workshops had drilled down to reveal the root causes of critical issues. Project management systems were introduced to ensure successful implementation and monitoring of agreed actions, and to check measurable impacts on cancellation levels.

“At project commencement, reported and unresolved bugs totalled 878" Damien says. “These were reduced by 96% to 29 bugs after we implemented task triage rule development and clean up, new bug management processes to better allocate and manage development workflows, and three separate development and testing marathons.”

Cancellations due to bug issues showed a 58% reduction, dropping from a weekly peak of 60 to 25 per week. The overall cancellation rate during the same period dropped by 18%. “I didn’t realise the problem was so significant” James says.

"When we did zero in on it, I was hoping for improvements, better systems and better approaches. But the outcomes, and the way we’ve been able to maintain them over time, have definitely exceeded my expectations of what we might achieve."

“The project has already delivered savings of hundreds of thousands of dollars, and there is the potential to save millions of dollars in the long term.”

A separate problem-solving team identified the key drivers and issues leading to increased costs associated with new product and new project development. It became obvious that project rework and continually changing priorities were severely impacting the efficiency of the Design, Development and QA team.

After an audit of existing work processes and project management practices, processes were re-engineered using Lean and Agile methodologies.

Significant benefits from this project include: